STRATUM: "a level or class to which people are assigned according to their social status, education, or income." 1

A reflection into Contemporary cultural and social segregation, immerse into a social media cultural pattern (#foodies)

We create and repeat unconscious inequality driven behaviours hard to grasp in our daily habits; Twitter conversations, mobility around the cities, Instagram pics or purchasing patterns.

A data visualization website analysing #foodie pics patterns crossed with socioeconomical data on major social media sharing cities around the globe that will gain insight for scholars and interested people while increasing awareness into privileged individuals and government institutions making them conscious about there own segregated behaviours.

"In sociology and media history, the term “culture” is used to characterize behaviors, beliefs or artifacts of a group of individuals in a particular time period and location(s). For example, rather than thinking of “photography” as a single phenomenon, it is more precise to consider it as a collection of many different “photo cultures”, each with its set of distinct aesthetic rules and defining mechanisms. Examples of photo cultures include the “New Vision” European photography in late 1920s, the socially conscious photography practiced in New York in the 1930s, or the snapshot-style fashion photography in the 1990s." 2

I Aim to review Lev Manovich project Inequaligram[][#inequaligram] which makes a data visualisation of inequality using economics algorithms to identify areas in major cities where there is no social media relevance. Using multiple set of layered data I'll do a series of data mining and transpose visualisation experiments using his methods plus other layers of data that can vary from usual demographic studies provided for german oficial agencies, public API's, social media and any online data available in which I find sociological value.

Every experiment we choose to do will be documented, and I'll use the selected ones to debug into the general plan of find new ways to spot segregated patterns. 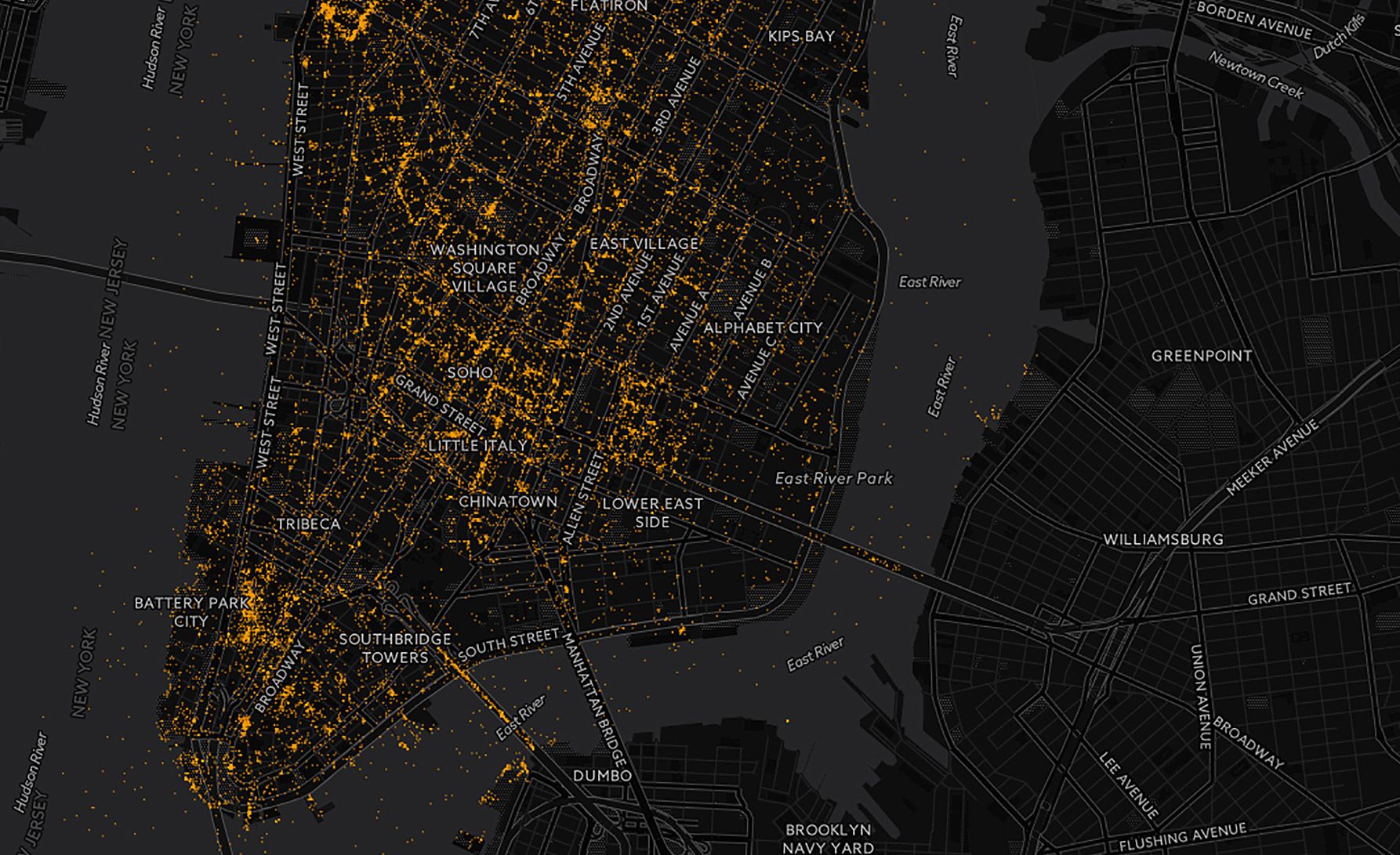 Manovich project[][#inequaligram] is based on cities as a whole every Instagram pic his team used as part of the data collection doesn't have any distinction besides geoposition and a division between tourists and city residents, The idea is to review and overlay his visualisation and his own social commentary using an extra layer to create social stratification using programming skills for this I can imagine 3 possible paths to follow:

Similar projects to the one I propose is the MIT Visualizing patterns of segregation project[][#mit] which is part of the MIT Media lab Human dynamics team this is their statement:

“Segregation, or income inequality, is one of the major problems of our society. Residential segregation has long been of research interest in fields such as sociology, economics, and psychology. But our behaviours are also segregated. In this project we want to visualize how human behaviours—like conversations in Twitter, mobility around the cities, or purchasing—show patterns of segregation. Our objective is to allow people to understand the segregation of behaviours in their cities to increase the awareness of that problem, but also to show how we can address potential solutions by using different layers of big datasets.”[][#mit]

How can we address the possibility to visualize segregated human behaviour? is maybe easier in the more segregated places on earth but in places like Germany maybe not that quick to catch the behavioural repetitions that create an unnecessarily stratified society.

One important key of the approach to an inequality map is public space, it contains a layer of invisible barriers we navigate every day with out paying to much attention, for example which street we are able to leave our car outside and which one we can´t, or which type of light we use. 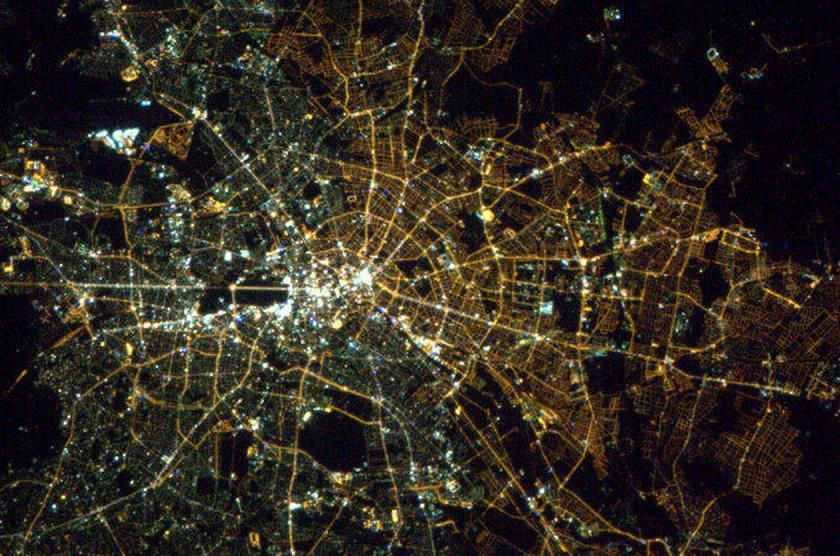 "In 2013, astronaut Chris Hadfield took a photo of the city from the 200 mile-high vantage point of International Space Station, and something immediately stuck out. To the west, the lights are white; to the east, they’re yellow. The boundary is a sharp, clear line, mirroring where the wall once stood. Hadfield tweeted the photo with the comment" 3

Photography is a powerful media, a lot of theoretic narrative has been writing during the whole XX and XIX century including disruptive text like "Das Kunstwerk im Zeitalter seiner technischen Reproduzierbarkeit", Walter Benjamin 1936 and Susan Sontag On Photography 1977

Taking into account this project is also based in the study of image and photography itself at least as part of the conceptual framework I propose the following list of references.

Colombia is the second more unequal country in latin America and the 12th in the world according to the CIA Gini index[][#wiki] As a personal background growing up there as a "rich" kid in a medium class neighbourhood in the middle of more lower class and poorer districts, it put myself surrounded by social injustice and made me experienced it in a granular level in a regular basis. It's impossible to leave your house and tour around any city in the country using any possible form of transportation available without noticing social inequality which is directly feed by corruption and Colombian armed conflict[][#violence] which fortunately never had to experience first hand.

Maybe, maybe not, I would be able to make a good statement or change something within the line between art, design technology and activism. There are a lot of problems derived from social inequality the ones that use to affect me like having unnecessary arguments or security issues in residential areas to very crude and horrible problems like political parties associated with the Army and militia taking advantage of it to kill around poor people in looming city corners and vulnerable habitants in rural areas all of this based in unbelievable feudal outdated economies.[][#violence][][#falsos]

It's incredible frustrating to bump into fellow citizen and peer equals around the globe that have no idea about what is going on never, They don´t interact whatsoever with people or places outside their own echoed culture and they are more familiarised with Florida cities that any portion of land in others states inside their own country besides where they live. I surely don´t think every single individual need to arise with actions to achieve sanctification or become an activist but the minimum responsibility as a citizen of a country will be to be inform himself a little about what happens, It surely seems less void and superficial.

"When most people envision giving no fucks whatsoever, they envision a kind of perfect and serene indifference to everything, a calm that weathers all storms.

This is misguided. There’s absolutely nothing admirable or confident about indifference. People who are indifferent are lame and scared. They’re couch potatoes and internet trolls. In fact, indifferent people often attempt to be indifferent because in reality they actually give too many fucks. They are afraid of the world and the repercussions of their own choices. Therefore, they make none."[][#fuck]

I´m convinced now about talking and working about this utterly annoying feeling that produces me apathetic disengage people and segregated circumstances. I said that knowing we all are up to some extend part of it, I more likely had create opportunities around me for this to develop, we all do. I would like to center myself in spot this moments, a lot of data analysis in the case of Manovich work using social media[][#inequaligram] is run through entire cities or countries regardless of any social distinction which I think also permeate social media liveliness, so don't take that into account is a big gap. I would like to debug data analysis of social media slicing as many layers of social stratification that move around as I can. Of course we can easily distinct inequality through media just pointing who can access internet against who can not but I´m more interested in the subtle differences that perhaps don´t even met the eye in human organizations that supposed to essentially equal. I don't want to complaint, I value the society that more social democracies have created and I value Germany the society I choose to live in a lot, been that the case I do think one of the principles that keep this society sharp and thinking about what can still be better is autocrictisism.

[#gentrification]: The term gentrification was coined in 1964 by a British sociologist – Ruth Glass – when referring to the alterations she observed in the social structure and housing markets in certain areas of inner London.  Glass observed; "One by one, many of the working class quarters have been invaded by the middle class - upper and lower ... Once this process of 'gentrification' starts in a district it goes on rapidly until all or most of the working class occupiers are displaced and the whole social social character of the district is changed" (Glass, 1964, p.xvii).

[#fuck]: Mark Manson, The Subtle Art of Not Giving a F*ck: A Counterintuitive Approach to Living a Good Life, Print. 2017